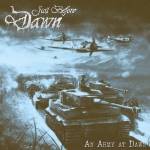 Lest we forget, not only war veterans, but also the veterans of Death Metal, the mighty BOLT THROWER. Former BOLT THROWER growler Karl Willets is doing his to keep the spirit and legacy alive with MEMORIAM and in Sweden Anders Biazzi is doing his service with JUST BEFORE DAWN, which now is ready with the fourth full length album “An Army At Dawn”. It is no big secret that JUST BEFORE DAWN is being inspired by and paying homage to the English giants, the first riffs of the first track ‘Paths Of Armor / To The Last Tiger’ are kindly borrowed from BOLT THTROWER and we do also get a well pointed ‘For Victory’ during the track, even though there is a ‘no chance’ in front of it. The band has evolved a tad from album to album, the main theme is the same, you are not in doubt what you are listening to, when listening to JUST BEFORE DAWN, though here the guitar game is upped, the main riffs are still heavy and hooking with a nice melodic edge and the right heavy Swedish sound with a British twist. The melodies are getting more space and continuing the path from “Tides Of Blood” and there are some great ripping solos. Just check out ‘Dance Of Katyuasha’, a track that also has the, in my ears, best and sickest vocal performance on this album from Thomas Clifford of THRONE OF HERESY. If you are into World War themed Death Metal JUST BEFORE DAWN is serving some great tunes, this is so much more than a rip off project of the band mentioned quite a few times during this review. JUST BEFORE DAWN is paying heavily homage, no doubt about that, though Biazzi is a solid songwriter, who writes some damn catchy, yet brutal songs. He knows his way around a heavy melodic and hooking riff. There was a reason for AMON AMARTH’s demo “The Arrival Of The Fimbul Winter”, the first label release “Sorrow Throughout The Nine Worlds” and the debut full length “Once Sent From The Golden Hall” kicked serious ass and became successful more or less right away. “An Army At Dawn” is worth giving some spins, it’ll take you straight back to the battlefields, and is yet an arsekicking album, cementing JUST BEFORE DAWN’s legacy. Enter the profane creation: www.facebook.com/justbeforedawntheycame, www.rawskullrecordz.com