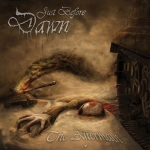 Do you still miss your dose of BOLT THROWER inspired Death Metal, now when the old gods don’t seem to be that active on the song writing front? There are several bands on the Death Metal scene trying to live up to the Brits heritage, though not many are doing it as thoroughly as the good Swede Anders Biazzi with his band JUST BEFORE DAWN. JUST BEFORE DAWN released their debut album "Precis Innan Gryningen" (which is the band’s name in Swedish) last year and already now, they are ready with the follow up, yet a slasher of war themed Death Metal delivered with a punch to your chin. Biazzi is writing all the music and handling guitars and bass, besides a good deal of guest-guitar leads, and using different growlers to haunt our ears. On the first album the drums were programmed, though this time around he hooked up with Brynjar Helgetun who has laid down drums on the latest album from Biazzi’s other band BLOOD MORTIZED and drummed on quite a deal of Rogga Johansson’s projects. A more varied performance wouldn’t have done bad, though the midpaced more or less same paced beat without much variation, does fit the music and weight of the album quite well. There are some vocalists going again from the first album, which is just fine, as no one did a bad job, though the performance on here from Dave Ingram from the mighty BOLT THROWER is quite nice, Marc Crewe, who used to be in MORGOTH, is also doing a cameo, though my favorite performance is from Jonas Stålhammar (GOD MACABRE, UTUMNO, BOMBS OF HADES) on ‘Soulburner’, good track and godly vocals. But again no weak vocal performance at all. All the chosen vocalists are doing their songs good, and the momentum is never lost, even though each track has a new vocalist, great song writing and set up. If you were into the first album from Biazzi and company, this one will hit you right again, and if you haven’t checked out JUST BEFORE DAWN yet, and you enjoy BOLT THROWER or just war themed mid-paced Death Metal, you won’t go all wrong with this album, a natural continuation of the first album with a tad, though not too much progression. When you push play on a JUST BEFORE DAWN album, you know what you’ll get. When cannons fade, seek more info in these trenches: www.facebook.com/justbeforedawntheycame, http://chaos-records.bandcamp.com, www.chaos-records.com