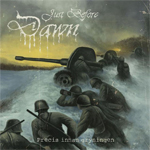 “Just Before Dawn” is what the meaning of the title is in English, and in war, just before dawn is where you usually attack the enemy, as no one are ready for an attack that early, even though all battle plans works with such attacks. And as the band name and the title suggest, this is Death Metal with war thematics, the Swedish BOLT THROWER one can say, now when the proud Englishmen doesn’t seem to want to put out new music, though JUST BEFORE DAWN is somewhat more than a tribute. The project, I think we can call it that, as the band consist of Anders Biazzi, known from BLOOD MORTIZED and, back in the days, AMON AMARTH as Anders Hansson, who handles guitar and bass, and then a bunch of growlers from around the Swedish Death Metal scene (as well as Haubersson from Germany’s REVEL IN FLESH – Frank). A wicked blend of before mentioned BOLT THROWER and the enormous wall of melodic riffing, that painted AMON AMARTH in their beginning, and sheer Swedish Death Metal brutality, is a good way to describe this record, as the midpaced guitar driven madness bulldozes its way through my speakers and into my ears, leaving belt prints and bullet shells all over. The different vocalists works great as well, they are supplementing each other very well, and all add to the overall doomy and epic atmosphere, and are all Swedish Death Metal growlers in a minor or larger scale inspired by Matti Kärki? "Precis Innan Gryningen" hit me somewhat harder than I expected, I didn’t really know what to think, when I read about the project, though the pummeling the numerous listening sessions of this album has given me, was apparently needed. Classic war-themed Death Metal with an enormous punch, a near perfect blend of BOLT THROWER and Swedish Death Metal, fans of both unite! www.facebook.com/justbeforedawntheycame, www.chaos-records.com