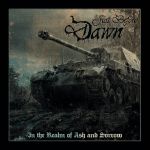 JUST BEFORE DAWN
In The Realm Of Ash And Sorrow
(Raw Skull Recordz)
26:37min

Just before dawn is when they attack – a classical military move, to engage the enemy just before they awake and are ready to fight back. How effective this tactic is nowadays I don’t really know, as I reckon most military leaders around the world, somehow have studied military history and tactics and know a thing or two about how they will be engaged. Though speaking of military tactics, it seems like attacking at dawn, is the only military tactic a crumbling superpower has gotten right, when senseless attacking neighboring countries. The two axe wielding Swedes, the British drummer and the growling Dutchman in JUST BEFORE DAWN attack at all times! When you press play on one of their releases, you’ll get pummeled by an all-out attack of old school Death Metal lead by crunchy guitar riffing with an epic melodic feel to the guitar tone and the execution of the riffs. This new EP from the band is not far from what we already have heard from the side, heavy, brutal and aggressive Death Metal with the melodic and epic edge, distancing it from much of the rest of the Death Metal scene nowadays. There’s the heavy nod to the mighty BOLT THROWER, the band’s roots in the old school Swedish Death Metal scene and some hints to the greatness of the Dutch Death Metal scene, which at times were heavily inspired by the Swedish! The band seems revitalized, the tracks on this release sound as fresh as ever and a return to old antics, which works really well. We also get two homages to two giants within the Death Metal scene that we lost last year. First off, a cover version of ENTOMBED’s mighty ‘Drowned’ of the seminal “Left Hand Path”, which you might have figured out is a tribute to L.G. Petrov. And then we have ‘The Realm Of Ash And Sorrow’ a tribute to Sven Gross from just as mighty German Death Metal rippers FLESHCRAWL, another commanding growler we lost last year. The ENTOMBED cover is delivered the ENTOMBED way, which is fitting, quite powerful with Biazzi’s own guitar tone, which transforms it into JUST BEFORE DAWN – and the tribute to Gross is an immense and intense melancholic and epic journey! Another five tracks oozing of the best of Swedish Death Metal with a heavy dose of war romanticism and respect for the past and its heroes. A fat organic production sounding more like 1992 than today, which is a big plus, intensity and all those killer guitar riffs – a release like this sets me back in time, to a much simpler place – and that is at times what we all need I guess. For more JUST BEFORE DAWN information please visit www.facebook.com/justbeforedawntheycame or https://justbeforedawn1.bandcamp.com, label contact: www.rawskullrecordz.com