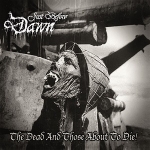 JUST BEFORE DAWN
The Dead And Those About To Die
(Chaos Records)
27:34min

The war machine is back, Anders Biazzi’s Death Metal freight train featuring Brynje Helgetun on drums, and now with Jonny Pettersson behind the microphone, growling his guts out. This EP was slated for a fall 2015 release, though I think it more or less just has been released on CD by Chaos Records, and perhaps saw a release on cassette tape by Till You Fuckin Bleed late last year. The two earlier releases have been heavily influenced by the mighty BOLT THROWER with the trademark Biazzi epic guitar riffing, which became widely known, when he was playing with AMON AMARTH in their early days. This release has a part of that trademark sound as well, though shifts a tad, especially, with the third track ‘Graves Without Crosses’, which displays a full on epic atmosphere, while still being heavy Death Metal. And that continues on the fourth track ‘Into The Iron Mist’, atmospheres which reminds me of HYPOCRISY’s epic tracks, though still sounding like JUST BEFORE DAWN. Great songwriting with a couple of extra dimensions, compared to the two first albums. I think it is quite impressive how the band can keep on churning out quality music with the speed they do. Two full length albums and an EP within two years. I was a bit sceptical when I was about to listen to this release, though the guys impressed me once again, and it feels as fresh and hard hitting, as when I lead ears upon "Precis Innan Grynningen" the first time. And with the last track on this release ‘Through A Rain Of Fire’ they are taking it a step further with hard hitting, brutal, heavy, epic, nostalgic atmospheric Death Metal. The very best of the bands mentioned and classic Swedish Death Metal and CENTINEX on their heighest, made into JUST BEFORE DAWN’s own sound and suckerpunch, it works! March into eternity: www.facebook.com/justbeforedawntheycame, http://chaos-records.bandcamp.com