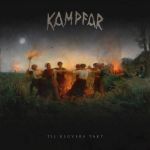 Well, Norway’s KAMPFAR are already around for nearly 30 years and have released eight albums since 1997. Fun fact: despite that, I never listened to their music intentionally. And I can’t even tell you why. Yet I can tell you that I should catch up on that, judging from the album “Til Klovers Takt” which is KAMPFAR’s album number nine. The mix of Epic, Pagan and Black Metal with some ideas from Post Black Metal really is enthralling. Just take the long opening tune ‘Lausdans Under Stjernene’, that combines epic moments with some raw Black Metal outbreaks and atmospheric breaks, creating a musical roller coaster ride full of mood swings. The introduction to the following ‘Urkraft’ reminds a little bit of RAMMSTEIN, but turns into an overall epic tune, with some doomy moments as well. ‘Fandens Trall’ and ‘Flammen Fra Nord’ are more based in Black Metal, yet with some unexpected twists. ‘Rekviem’ comes along with some keyboards that underline the Pagan and Folk approach of the song. In the end, the gloomy ‘Dødens Aperitiff’ ends the album in an unexpectedly sinister way. As a summary I can only state that KAMPFAR was the probably best known band I never listened to before. And they proved me wrong for not paying attention until now. In case you made the same mistake and dig fine Black and Pagan Metal, “Til Klovers Takt” should be a nice discovery for you as well. Visit www.facebook.com/kampfarofficial and www.facebook.com/indierecordings