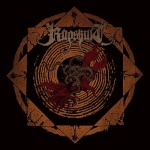 The Polish Black Metal act KAOSKULT from Zielona Góra (Lubusz Voivodeship in Western Poland) is already around for eight years now. But they only released a demo up to the day their first album “Secret Serpent” was released in early 2014. Was it worth the wait? Not really, unless you’re into second to third class Black Metal. KAOSKULT want to be at least like DISSECTION, but they aren’t even close to the quality and spirit of Jon Nödtveidt and his music. None of the five mostly rather long tracks on “Secret Serpent” is remarkable or catchy enough to stay in remembrance. No idea on this album wasn’t already done in a better way. And the sometimes rather weird keyboard sounds won’t make it better. Yes, sometimes there’s hope, some songs have nice moments, like ‘Eternal Threat’ or ‘(Primal) Chaos’. Sad enough these moments don’t last long and get lost in recycled riffs and uninspired melodies and harmonies. Honestly, I listened to “Secret Serpent” four times, always hoping for the album to burst, but it never happened. The somehow thin and synthetic sound adds a lot to the musical emptiness here. So, I can not recommend this album to anybody. If you want to find out more anyway: www.facebook.com/kaoskultofficial, www.odiumrex.com