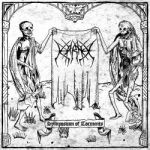 In the last few years, the French Black Metal scene brought some real fine bands to light, or better to dark, if you might excuse this rather cheap pun. Anyway, France gave us unique and original Black Metal bands that really stood out of the masses. So, when I got hold of this album and did some research beforehand, I anticipated something at least nice, since KARNE are from Nancy in the Lorraine area of France. Was the band’s second album “Symposium Of Torments” worth that thrill of anticipation? The answer is a definite “maybe”. One the one hand, I dig this rough and unproduced sound for sure. Somehow I feel reminded of early DARKTHRONE here, in those times when they released those under- to unproduced albums like “Transilvanian Hunger”. But on the other hand, KARNE are that influenced by the Gothenburg school of Black Metal, it even hurts sometimes. Well, this might be a little exaggerated, but the melodic guitar rides the listener through the whole album and is not just simply present, but defining for the sound of “Symposium Of Torments”. So, if you can’t stand IN FLAMES and the likes anymore, you will have a problem with this album. Yet, those who still secretly (or openly) listen to albums like “Subterranean” and aren’t yet fed up by the melodies might listen to this album with a smile in the face, just like me. In case you’re interested, check KARNE at www.facebook.com/karnebm or www.epictural.fr