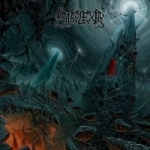 Wow, I should have listened to this band before. I might have said that thousands of times, but this is another case that it’s worth it. The Finnish KATAPLEXIA are already on their third full-length, the second one for Xtreem Music, and this time with a full line-up (until now the drummer, Rodrigo “Fatality” Artiga, took care of them). And yes, they released a great album of pure brutal Death, but from the old one, when the brutalized evolution of Death Metal started to be cold like that, with huge influences from SUFFOCATION, PYREXIA and even some of the first DEEDS OF FLESH and DISAVOWED. So you can imagine what you will find here: speed, blastbeats, weird rhythms, heavy and groovy riffs, vocals from the deepest and powerful to the more froggy ones and with a full amalgam of brutal and extreme resources. So, what makes them different from all those bands appearing these last times, apart of the time they’ve been playing it? Really simple. They have that darkness that the first bands of the style used to have and which the most of them have lost. The cover of ‘Supreme Authority’ gives a clue about that. It isn’t the typical gory one with brains and guts everywhere, but pure darkness. In fact, the sound they achieved for this recording is quite similar to the one of the first SUFFOCATION, where darkness prevailed as well as brutality and technique. On the other hand, they have that groovy touch which is usual too in the style, but without going so far as the “Slam” stuff. They incorporate it to their sound. To summmarize, the writing of everyone of the tracks of this album is carefully done, there are no filler parts on any level. Especially on the guitars, which are sublime, with really smart breaks, the dark parts I mentioned before, just were they are needed, and a lot of quality leads. Few Brutal Death albums appeared this year providing something new, even having something more or less interesting, but this one will be one of them. www.xtreemmusic.com