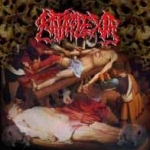 A “short but sweet” brutal Death Metal effort is Finnish KATAPLEXIA’s debut “Morgue’s Reality”. Contemporary Death / Grind vocals à la DISAVOWED meet with straight old school Death Metal drive and some slower / mid-tempo passages one can also find in older DYING FETUS or the earlier SUFFOCATION, but of course there are a lot of blasted parts, too. KATAPLEXIA is a project-band of DEEPRED / KABAK member Rodrigo “Fatality” Artiga and except a couple of solos he does everything himself on this CD. I was quite surprised to hear how good he actually manages to deliver an absolutely unoriginal, but hellish entertaining violent and rousing Death Metal album with enough variation to remain interesting even after more than one listens. The sound could be a little bit more bassy but overall the production of “Morgue’s Reality” is well-done, transparent and powerful. Artiga’s way of songwriting definitely deserves respect, because there is not a single crappy track on this album and you get loads of surprising breaks, numerous great not too technical riffs and brutal vocals. “Morgue’s Reality” is an album that focuses on the essence of brutal Death Metal and does not fall into the “harder, faster, more technical” trap – one thing I really like about it. Of course you’ve heard bands like KATAPLEXIA a thousand times before, but they don’t claim to do anything exceptional or new, but they do it good, really, really good! And at least I can think of countless bands in the genre which are not capable of writing such convincing songs as KATAPLEXIA can. Visit the label’s website via www.severemusic.com for additional information or write an email to rodrigokabak@hotmail.com.