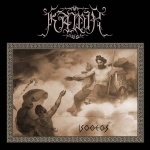 Well, to put things in perspective, I’m not the biggest fan of Pagan Black Metal, far from it, and when there is flute involved in Metal you better count me out right away. But as with everything, there are exceptions, and let me tell you – KAWIR is an exceptional exception! First of all, they belong to the elite Hellenic Black Metal school – ROTTING CHRIST, VARATHRON, NECROMANTIA, ZEMIAL, you know the names. In fact, my very first acquaintance with KAWIR happened back in 93′, when they were sending out their first promo tape for zines, and from what I can remember, it was quite good. But at the time the Black Metal scene was getting ridiculously stupid and they sort of faded from my radar. Fast forward 20+ years, and here’s my second chance to rediscover KAWIR. "Isotheos" is their 5th full length album among numerous split releases, not the newest one – it came out in 2012, but in case you missed it back then, now is a good chance to correct this mistake. The thing that I like about almost all those aforementoned Greek bands is their ability to submerge the listener deep into their musical, atmospheric landscapes, and KAWIR truly honed their craftsmaship. The songs on "Isotheos" are long, clocking in between 7 to 9 minutes, mostly mid-paced, epic sounding Pagan hymns, reminiscent of BATHORY Viking-era albums in composition, but with that special Hellenic warmth. The riffs are rather simple, but the mythic atmosphere they create is breathtaking, it’s one of those rare occasions when listening to the music one can really feel transported back in Pagan times with all those Gods having orgies and enjoying those hymns. Standout tracks for me are the opener ‘Daemon’, the really catchy ‘Hymn To Winds’, the commanding ‘Hades’, and the fast-paced title track ‘Isotheos’, displaying KAWIR’s ability to unleash the demons and step on the gas, conjuring pure Black Metal madness. And even ‘Hymn To Apollo’, despite its flutes, manages to envenom me, the middle part is pure genius, a perfect example how to build the atmospheres changing the dynamics and using just flutes, although I’d never thought I’d say that! So, you live and learn, and KAWIR showed me that once in a while you can find a bloody diamond among the ashes. Also a band which closes the album with a song called ‘Panspermia’ gets a bonus point from me! This is highly recommended and I’ll definitely be checking what I’ve missed during those 20 years. Atmospheric Hellenic Pagan Black Metal of the highest class! For more info check out here: www.facebook.com/pages/kawir/127360740665261, www.deathrune-records.com