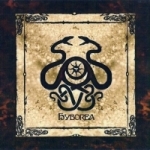 This is the full-length debut of the new band featuring Rhett Davis and Justin Christian, both members of the Doom band MORGION. The record serves 8 Doom / Death songs with prologue, epilogue and the short instrumental ‘To Reach Emptiness’. In my opinion the prologue and epilogue are a total waste, because there are only some clicks during the minute. The lyrics contain a concept about Conan of Cimmeria, that everybody should know because of the great movies with the governor of California. To describe the music, a mixture of bands like Candlemass, Primordial and Celtic Frost come to my mind. The songs are all more midtempo but with massive guitars milling over you. Most of the songs are about 6 to 9 minutes but never get boring because the band knows how to vary them with breaks, guitar licks or atmospheric parts all based on a diversified drumming. The vocals are deep growls most of the time, but sometimes interrupted by some clean spoken parts. The whole package is rounded by a solid production. So, well done guys. www.keenofthecrow.net or www.myspace.com/keenofthecrow.