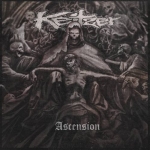 I have heard things of this German band. They are going since 1999 and this is their sixth record. Having a very similar name to another German band which I very highly regard (KETZER, and yes I also like their new album a lot). This KEITZER plays a strong form of Death Metal, with some Grind influences. More than once TERRORIZER and MORBID ANGEL were named when it comes to their previous albums, and there is a reason for that. I have heard they have some Hardcore influence in previous albums, but I can hardly hear any here. I was a bit annoyed when looking at a picture of the band members, as yes, they do look like a Deathcore band, but fear not, that is the nearest the band will get to a “core” thing. From what I remember hearing from them, they are venturing more and more into Death Metal territories. I can name bands like SUFFOCATION and IMMOLATION among the bands I will surely compare them to, maybe a bit more melodic. So this gives us a good lesson, not because band members are in spikes and CELTIC FROST t-shirts will make a killer band, and also not because they look like a Deathcore band they will suck. Yeah, in a perfect world we will take the be(a)st of both but for now, I prefer and will always go for music rather than image. As for this release, it is very good, and if you thought their previous albums were good, this one is even better. www.facebook.com/pages/keitzer/191875597498653, www.fda-records.com