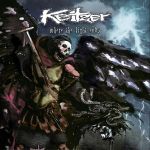 KEITZER is a Death Metal band from Germany that has been around for a while now, and this is in fact their seventh album, "Where The Light Ends", with a suitable grim reaper cover artwork (in this case hinting at the classical world, with armour, sword and wings and facing a Medusa head), and it’s quite the Metal attack! They have amazing speed (that drummer is inhuman) and create an extremely aggressive assault upon the ears of the listener. Instrumentally, everything is packed with cool riffs delivered by heavy and distorted guitars and bass that shines with the fine production and the precision of the execution. Old school influences are often evident in moments such as the opening of the title track, slower and very much BOLT THROWER styled, which quickly increases speed into the full throttle they so enjoy. What does not sound so old school is the vocal approach. Christian Chaco has a suitably raspy and aggressive voice, but his delivery is somewhat more modern and Hardcore tinged, reminding me of bands like THE HAUNTED. Sometimes the songs themselves may reflect this more modern influence, such as ‘Tyrants’, but there is a worthy effort in the attempt to compose Death Metal that is well played and actually musical; listen, for instance, to the impressive ‘Slay ‘Em All’. I also enjoyed the movie sound bites, that made me reminisce (mainly the large Thulsa Doom discourse from ‘Conan the Barbarian’). If you are into very fast drumming and aggressive music, you should check this out at www.facebook.com/keitzer, www.fda-records.com.