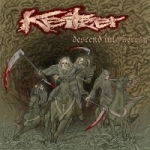 KEITZER
Descend Into Heresy
(F.D.A. Records)
30:04min
This is the second album from this Death Metal and Grindcore infected band from Germany. For a change there is no intro and the music kicks in with the intention of gripping the listener from the throat until it cannot breathe. Yet, it seems that for me the first four songs were like the very same one…very fast riffs, intense pummeling drumming, and angry vicious vocals. The very essence of the band reminded me a lot of Swedish Death / Grind bands from the early 90s although with a more massive production. A fat and up-front guitar tone will always score high in my book, yet if not managed correctly it can turn into a wall of noise, which I am afraid this band approaches at times, probably due to high level mastering. Also, I cannot notice any guitar solo in here, which is not something really needed in a Heavy Metal band, but for some reason it shines more for their absence. After a few listenings I realize that the problem here is a somewhat weird balance of the songs, as many sound like done in a pre-formed recipe, while there are some killer songs like ‘Wrath’, ‘Circles’ and ‘Chains’. I can also sense a quite subtle old German Thrash influence here and there. But, there is also present a quite bouquet that recalls more those so called Deathcore bands which in my ears are abominations derived from what once was a melodic yet aggressive form of Death Metal. If the band leaves that noxious influence and starts dwelling deeper into the roots of Death Metal or Deathrash, even recalling extreme Grindcore, I am sure this will be more enjoyable. Those 3 songs prove they can do a lot better, and hopefully that is the path they will wisely choose from now on. And with another band from their land named almost exactly (the mighty and younger KETZER), but playing in a masterful way, they do have some serious work to do. www.myspace.com/keitzer , www.fda-records.com
Julián “Heretic” Núñez