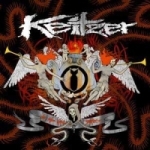 Not to be confused with Black / Thrash country mates KETZER, Germany’s KEITZER is totally modern-sounding, crushingly powerful melodic Death / Thrash at Grindcore paces with a prominent new-school Grind / Hardcore influence. The simplistic riffs are big and iconic, and go a long way to making this such a sick album (above and beyond the insanely ripping drums). Said riffs seem in the primitive tradition of Thrash-influenced Black Metal acts like MARDUK (but you might also say they’re akin to old Hardcore Thrash, like SEPTIC DEATH). And yet, taken as a whole, there is absolutely no retro vibe whatsoever, ’80s or even ’90s. Instead, you get a blistering modern production that could only exist in the new millennium. It’s loud, abrasive, and not warm at all, but it is still good and works perfectly to amplify the extremely aggressive material. The near constant barrage of shouted vocals give it a very modern Hardcore touch also, unfortunately sounding indistinguishable from a lot of other Grind / Hardcore bands running these days. But that’s not too serious a problem at all, as the material cuts through with the sheer brutality of unrelenting grinds backing-up dark melodic Metal. Think of something maybe like a mix of INFERNAL WAR and ROTTEN SOUND. Highly recommendable if you like really catchy blasting shit or, if you prefer, the sultry sound of a snare drum fucking you in the ear. www.myspace.com/keitzer, www.fda-records.com