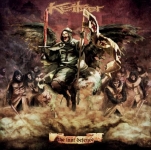 Even though German KEITZER are active for one and a half decades, the quintet happened to be a mere underground phenomenon for a long time. Their first three albums (plus two split 7”es) were released through small labels. The first step out of the deepest underground happened when KEITZER signed to F.D.A. Records, who released the fourth album “Descend Into Heresy”. Now it’s the same label again that’s in charge of the fifth strike of the Münster based band. “The Last Defence” marks my first contact with the sound of KEITZER. So I can’t say much about any musical evolution since their first album. What does “The Last Defence” offer? A brutal mix of Grindcore and Death Metal with some elements of modern Metalcore that sounds a little bit like a ruder version of MISERY INDEX. Technically, KEITZER are on the highest standard of the Grindcore genre, no doubt, especially the drumming of Tim is absolutely top-notch. And the production of the album is as fine, since it was done by Jöeg Uken at the meanwhile pretty famous Soundlodge studios. But somehow I ain’t as enthusiastic as I should be under those conditions. Maybe it’s the fact that nothing really remains in memory after the fine and melodic instrumental opener ‘Bellum Indicere’ and the rabid hyperblast ‘Exist To Destroy’. Don’t get me wrong: some of the riffs are really excellent, but the final result sounds a little bit too lifeless and sometimes even monotonous. It’s not until the end of the album, that the monotony breaks up with the pretty variable ‘Crusade’ and the fine album closer ‘…Before Annihilation’. I’m sorry to say that “The Last Defence” is the F.D.A. release that addresses me least. Grindfreaks shouldn’t give too much on my opinion anyway and check the band at: www.facebook.com/pages/keitzer/191875597498653. And don’t forget to visit the site of the dedicated label: www.fda-records.com