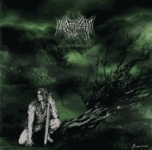 The small label Van has gained quite a reputation within the German Black Metal underground in recent times, due to releases by acts such as GRAUPEL or FUNERAL PROCESSION. And KERMANIA’s debut also received some massive praise already. Unfortunately I can’t join in wholeheartedly. The tracklist with four songs, of which two clock in at approximately 25 minutes instantly reminds of Count Bikerface’s "negro"-masterpieces and although that comparison surely is not an original one it still seems not too far fetched. Just as the beloved Christian Quisling some years ago KERMANIA – supposedly a one man army as well – aims for a sound that is just as heroic as melancholic, only slightly interrupted by short, fast-raging parts. The opener ‘Des Schwertes Schärfe Beichtgesang’ is a good example with its repetitive parts that create an atmosphere full of longing until they finally culminate in a truly majestic climax. But the line between grandeur and boredom is remarkably thin and in my opinion the music on "Ahnenwerk" falls on the latter side too often. There are some magnificent parts on this one but the arrangement of the extra-large tracks is not wholly convincing and especially the clean vocals still leave a lot to be desired. I’m also not too fond of the lyrics that are stuck somewhere between the pretentious and the mundane. But there’s definitely an impressive lot of potential here and if the mentioned flaws are eradicated we should look forward to some really exciting records from KERMANIA in the future. File under "hopefuls"… www.van-gbr.de