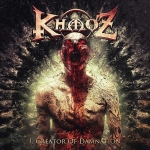 The Dutch extreme Metal scene is known for a lot of good to fantastic bands. And still there’s no end in sight, taking into concern how many old bands reunited or restarted in the last years. Of course there are newer bands as well. KHAOZ from Amersfoort is one of these fairly new bands. The six piece started in 2008 and up to now released a self-released EP and the album “Salvation Through Bloodshed” on the Polish label Mad Lion. With “I, Creator Of Damnation”, we have their second full length release here, the first I heard of them. After several listenings, I have to admit that I missed something for sure. The most striking fact about KHAOZ is the fact that the band allows themselves the luxury of two vocalists. While Olav is a classical grunter, Johan has a voice that reminds of former ARTILLERY singer Flemming Rönsdorf, who ennobled the first albums of the Danish Thrash Metal masters. And it’s not just Johan’s voice that gives the music of KHAOZ a twist into Thrash Metal. The music on “I, Creator Of Damnation” is also a little bit influenced by Thrash Metal as well. Sometimes LEGION OF THE DAMNED come to mind, sometimes THANATOS. Not the worst references for a Death Metal band with class, I should say. And KHAOZ are a Death Metal band, yet not a typical one, thanks to the aforementioned influences and resemblances. It’s a real joy to listen to songs like ‘Sodium Amytal’, ‘Crimson Mind’ or the quasi title track ‘Creator Of Damnation’. And with these listening suggestions I’ll leave you here and listen to “I, Creator Of Damnation” again. You will find the band at www.khaoz.nl or www.facebook.com/khaozofficial and the label at www.facebook.com/godeaterrec