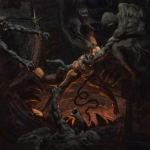 KHNVM, pronounced as “Khaa-nooom” is a Death Metal band from Bangladesh / Germany. Juggling multiple approaches with their execution KHNVM have put together a stellar slab of Death Metal in a difficult year. At the face of it, although the sound seems straightforward, this trio have borrowed a bagful of mystic melodic elements from the east and wove them with the spirit of old school Death Metal giving it touches of Doom. The guitars jump around, ahead a moment and then to the background in the mix, the vocals and the drums take center stage now and then, the band has carefully crafted their vision and has moving parts across all songs. Nothing is constant here, the sound is evolving, the band is marching ahead and the rhythm section stands out brilliantly throughout the album. The bass is prominent on the album and operates as a unit with the drums, it’s such a treat to listen to! Frankly, I did not know about this band earlier but I am now keen to listen to more of their stuff. “Portals To Oblivion” is their second full length released via Neckbreaker Records. On the whole, KHNVM have a rather traditional approach, but as soon as you tag it with labels, they’ve taken the entire delivery sideways to take you by surprise. Still, KHNVM’s Death Metal is muddled with the ways of the old, chuggy, relentless and the ever attacking. The band takes no rest anywhere during the 38 and half minutes and is practically on the warpath all through. This is good Death Metal that invokes the reliability of the British legends of the genre along with NILE’s approach towards riffing. If you don’t know about KHNVM, check them out right away and pre-order this! My standout track on this record is track #4 – ‘Drink From The Chalice Of Suffering’ where the band is operating at the peak efficiency in terms of writing and delivery. For more KHNVM information please visit www.facebook.com/khnvm666, www.facebook.com/neckbreakerrecs