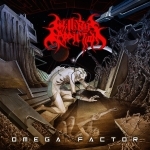 Here is some really cool old stuff! KILLING ADDICTION is a classic act coming from the awesome 90s Florida’s Death Metal scene. Formed back in 1989, KILLING ADDICTION was active until 1998. Then, in 2006, the band reformed and is still around (in fact, they released an EP entitled “Shores Of Oblivion” two years ago, that I haven’t heard yet). The stuff that I’m reviewing is some kind of compilation of their three first productions released the current year by Spain’s Xtreem Music. It features the “Omega Factor” (1993) full-length, the “Necrosphere” (1991) EP and the “Legacies Of Terror” (1990) demo tape. When you hear the opening track, you know immediately this is some different stuff from the very first seconds. The performance of the vocal department is the most distinctive thing, especially because of the Patrick Bailey’s deep inhuman growls (“No vocal effects are used on this album”). Besides this, another great resource is the brutal guitar tone. The first track must be considered an instant classic. The second track, ‘Nothing Remains’, gives a great intro, cool twisted guitar effects and solos, and some effective double kicks. ‘Altered At Birth’, the fifth track, offers a great Death Metal intro too, but the development of the song is nothing particularly interesting (the first two notes sound really similar to DEATH’s ‘Altering The Future’). ‘Global Freezing’ is another great track charged with some crushing drums at the end of the composition. The album closes with ‘Impaled’, another good Death Metal track that maintains the same style and standard of the previous seven tracks. This album is charged with some really awesome moments, including great vocals, semi-technical guitars from time to time, fantastic riffing and tempo changes, double kicks and tons of brutality in a time where bands tried to distinguish oneself instead of staying in a safe place just making what others were doing. The next three tracks here belong to the “Necrosphere” EP. This kicks off with a raw dose of brutal Death Metal in its purest form. Great work on guitars! The production is not as good as the “Omega Factor” album and the structure and vibe of the compositions are slightly different. You can hear a different work on guitars, distinguish really great ideas as solos and effects here and there. The music is even faster, raw and brutal than their debut album. The version of ‘Impaled’ is way better than the one that you can find on the debut full-length, in my humble opinion: the weird intro and the atmosphere with keys close to the end makes this track some kind of strange listening for a brutal act like KILLING ADDICTION, just close at the time to acts like TIMEGHOUL or NOCTURNUS. The last four tracks here appeared in the “Legacies Of Terror” demo tape. Here you can find some early versions of ‘Nothing Remains’ and ‘Necrosphere’, nothing really different from what you can find on the album. ‘Well Of Souls’ has some great riffing, sometimes close to Thrash territories and ‘Condemned’, the other song that never appeared on the next productions, has maybe one of the most brutal and vicious outsets. In conclusion: now you have a new chance to get this classic and brutal stuff that seems to be forgotten amongst the massive spate of new Death Metal acts. You can follow these guys at www.facebook.com/killingaddiction, and get this great release at www.xtreemmusic.com.