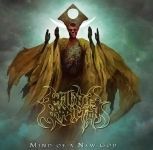 KILLING ADDICTION is one band that, I believe, never got the respect and the recognition they deserved. Their “Necrosphere” 1991 EP is an amazing slab of heavy, dense and obscure Death Metal. And “Omega Factor”, their debut LP, is simply one of the best records that came out of Florida back in the early 90s. Weird enough, it was never talked about as much as other releases from that era and location. Mostly due to non-existent label support and promotion. For me, everything they put out was simply brilliant. Then they went silent and after a 12 year hiatus, came back and released 3 EPs in a 6 year span. Well, it felt like they never left, still playing their distinctive brand of Death Metal. Sadly, in 2016, original member, composer and guitarist Chad Bailey passed away. After that important loss, instead of folding, the remaining members, including Chad’s brother Patrick (bass and vocals) kept the band going to honor his memory. And after 5 years of work, we are presented with “Mind Of A New God”, an absolute leviathan of an album. Every single positive thing about a Death Metal album is featured here. Their style of music is dark, dense and totally appalling. The new production values and a pristine mix make everything clear and elegant, yet the precise and sharp guitar tone, the pounding drums and the beefy bass timbre add up for a humongous sound. But fear not. This is not overproduced crap. Keeping true to their roots, “Mind Of A New God” feels like a kick in the teeth and it maintains that raw underground vibe that the band has had since its inception. The original line-up really shines here. Patrick’s deep growls and bass work are flawless. Chris York shows that he is a seasoned musician with huge abilities behind the kit and Chris Wicklein’s riffing is right on point. With the aid of the latest addition to the band, guitarist Devon McDonough, what you get is a colossal wall of distortion backed by an immense bottom end, prodigious drum work and massively fathomless growls. “Mind Of A New God” keeps throwing different things at the listener one after the other so there are no boring parts or moments. Yet, the evil and overwhelming atmosphere is there, constantly varying between slow, heavy as hell segments mixed with fast shrewd parts and everything in between. The leads are flashy, tasty and really well placed. Also, the song structure and composition is brilliant. I was so surprised by the fact that every song has its own identity and character. You never really lose the grip on the album. Am I biased? Sure I am. KILLING ADDICTION is one of my all time fave bands, having a glorious return to form and finally being recognized as a top tier in the global underground. But, if you find yourself doubting me (I hope you will), do yourself a favor. Stop whatever it is you are doing and go listen to “Mind Of A New God”. You will not regret it. Show some well-deserved support for the band here: www.facebook.com/killingaddiction. And get the album from their label here: www.xtreemmusic.com