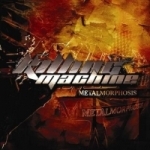 What a nice suprise this one turned out to be… KILLING MACHINE is the brainchild of Peter Scheithauer, who’s musical past already includes various different kinds of bands and styles. From the Melodic Rock act STREAM, to BELLADONNA, PUSHED (the band of part time SLAYER drummer John Dette) and the SLAYER / PANTERA – esque TEMPLE OF BRUTALITY. Enter: Dave Ellefson. The former MEGADETH bassplayer had already teamed up with Scheithauer in TEMPLE OF BRUTALITY, so it probably was kinda easy to get him on board for this band as well. As you may remember, some years ago Dave had produced a record by HELSTAR (not really something he should be proud of though), so connections to HELSTAR’s frontman James Rivera obviously still were there… and as he was convinced enough by Scheithauer’s demos, he agreed to join in. The line-up is completed nowadays by Juan Garcia on guitars (AGENT STEEL, EVILDEAD) and Jimmy DeGrasso on drums (Y&T, but also another Ellefson connection from his MEGADETH days). In 2000 KILLING MACHINE had already put out a self-titled debut album (via Candlelight Records), but with a slightly different line-up though. Never heard that, so I can’t really comment on possible improvements… Fact is that “Metalmorphosis” has become a very honest sounding, traditional Metal album, with musical references to JUDAS PRIEST (the album’s opener ‘Killing Machine’ for example is total ‘Painkiller’ worship including a Halford – like pronounciation in the word “brrrrrrrrreaking”!), classic ACCEPT (for the riffing / structuring of some of the songs) and HELSTAR (of course…) due to James’ charismatic vocal delivery! Unlike many other new Metal acts these days KILLING MACHINE never sound cheesy or too melodic, but always straight forward and very crushing. So far I liked every record with Rivera’s voice on it and “Metalmorphosis” is no exception here. I just wished this guy would finally find a steady musical home somewhere again instead of singing on records by tons of different bands that choose to hire his services. Websites of interest: www.killingmachine.tv, www.mausoleum-records.com