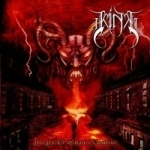 Colombian newcomers KING’s debut album "Forged By Satan’s Doctrine" is one intense piece of slab released by Deathgasm Records. A label that has been putting out top quality acts for some time now. Upon the first listen, the undeniable Southamerican brutality is all over the place. But not as in nowadays "Brutal Death Metal" but sheer musical savagery, infused with a dark and evil atmosphere that holds everything down. There is also a live feel to this release that reminded me of fellow colombians MASACRE. The production is raw, heavy, yet all instruments are audible in the mix. Specially, the drums and the bass guitar; the perfect foundation for the frantic guitarwork. The mastering is a little dark for my taste, but that doesn’t take away from the heavy storm of sound delivered here. KING is a blackened Death Metal killing machine, drawing influences from their own roots and certain technical aspects borrowed from the 90s US Death Metal style. Actually, a good comparison (even though I hate them) would be a bit less technnical SUFFOCATION mixed with a DEICIDE-like dual vocal attack and an strong DEATH YELL vibe. Altough this is their first album, KING is a force to be reckoned with. And to top it off, the lyrical themes are aggressive as hell! But in my personal opinion, a song titled: ‘Kill The Posers Like Fucking Christians’ just draws away the attention from the whole concept. It almost sounded like a joke. As a bonus, both songs off the band’s 2006 EP are included here. And they serve their purpose well, as they end up being proof of the huge evolution the band has had since then, because they turned being the weakest songs in the album. Anyway, this is a great debut and I totally recommended for fans of savage Death Metal from the depths of Southamerican Hell! www.facebook.com/pages/KING/126328987410787, www.myspace.com/kingbathroz, www.deathgasm.com