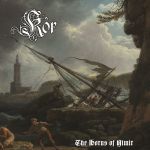 KÔR spawned from the Mecklenburg-Vorpommern region in Germany, which is known for its spectacular landscapes. Formed in this year by elusive St. (COLD EARTH, FULLMOON LUNACY, GRAIL, SHORES OF LADON, SHROUD OF SATAN) and Bavragor (BALNASAR, GRAIL, SHORES OF LADON, SHROUD OF SATAN), their many associations can immediately signal how this side project saw the light. St. handled the guitars, vocals and bass duties and Bavragor took care of the drums and some additional vocals for KÔR. No wonder, the surrounding fantasy like landscapes put a huge mark on these Germans, as their debut album title “The Horns Of Ylmir” is actually a poem which was first written by J.R.R. Tolkien in 1914. And the title refers to the ‘Ulumúri’ – the conches of Ulmo that give the sea music and cause sea-longing. Quite an enchanting legend and the magnificently drawn album cover (alas, no info about the artist found) immediately sets the atmosphere of what awaits inside. The four tracks of this record (lengthening little over 35 minutes) behold Black Metal soaked with atmosphere that paved the way for their Tolkien based lyrical theme. Tracks like ‘The Land Of Willows’, ‘White Wrath’ or ‘The Immeasurable Hymn Of Ocean’ establish the song crafting skills of these Germans as well as their lineage to JUDAS ESCARIORT, DRUDKH and BLOOD OF KINGU. Besides creating inciting and cold tremolo picked melodies, St. and Bavragor, both showed their inhumane throat screeches and shrieks all over the four tracks. Bavragor surely sounds like an avid follower of the Gylve Fenris Nagell founded drums school, ‘White Wrath’ says highly about that and also throughout the whole record. The analogous, yet warm, sounding production did it parts to refrain the atmosphere from being monotonous. So, with all these, even though it can be said, KÔR is one more side project now added into the innumerable numbers of others around, still their very personal intentions and musical visions set “The Horns Of Ylmir” apart. Hopefully with this debut record KÔR will grow further and musically stand out from countless many hyped Black Metal bands. Sol Records now makes this record available on CD, limited to 500 copies including an 8-page booklet. Also, for LP hunters, they are planning a vinyl release in the future towards the end of 2022. To know more about the band and label go here: https://shoresofladon.bandcamp.com, www.solrecords.de