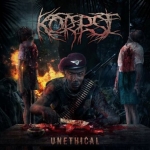 Dutch brutal Death Metal force KORPSE return with their second full-length album in their three-year band history. Founded in 2013, the guys, who are and were active in several brutal Death Metal bands like CLITEATER and TEETHGRINDER, know well how they want their Death Metal to sound. The first tunes of the opener ‘Collateral Casualties’ offer total devastation and brutality. Brutal and crushing blastbeats, heavy guitar tunes and deep guttural grunts varied by some cool screams. Especially US-horde MORTICIAN comes into my mind listening to their crushing tunes. Technically, the band is on a really high level and offers all, what fans of this genre are longing for. The average length of 3 minutes per song keeps them focused on brutality and groove but sometimes I miss some variety within the brutality even though they included some down-tempo parts in their songs which fit in very well before rotating the wrecking ball again. The production is clear and powerful and gets rounded off by a really cool and fitting cover artwork. All in all a brutal and diverting album but I personally miss a bit the soul and own direction in their music. But fans of brutal Death Metal or slamming Death Metal will not be disappointed at all when checking this album. More info can be found at the following locations: www.facebook.com/korpsesbdm, http://korpsesbdm.bandcamp.com, www.risingnemesisrecords.de