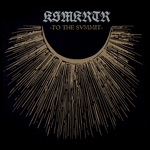 KOSMOKRATOR is another hopeful from our neighbor Belgium and active since 2013. Their sold-out cassette demo “To The Svmmit” from 2014 now gets a proper re-release on CD in digipak format and on 12” vinyl via the fine German label Ván Records in early 2016. The opening track ‘Ad Alta, Ad Astra’ starts with choral ecclesiastical chants and bell rings before after four minutes the dark and menacing trip starts. The foundation of KOSMOKRATOR’s sound is slow motion old school Death Metal with heavy and slow guitars, so heavy that also Doom- / Death of the late 80s / early 90s is a big influence in their sound. The lead guitar delivers dark and evil riffs, menacing but never too technical while the rhythm section provides a thick and heavy fundament. The drumming is fine and slow-paced but never overdone and the vocals vary between grunts and screams are levelled off properly so they do not appear too dominant. Sometimes even spoken words appear as used in older Death- / Doom releases of the 90s. Altogether a very fine opener and a real surprise indeed as the band really manages to sound old school in a really natural way. The second track ‘Adoration Of He Who Is Upon The Blackest Of Thrones’ is a bit faster but a real old school Death Metal wrecking ball and the rhythm section really makes my old head move again a bit. Really groovy and powerful material before turning old school again. The third and last track ‘Sermon Of The Seven Svns‘ starts also with a spoken, nearly whispered part before a scream starts the third inferno. Again a mixture of old school Death Metal with some slower parts crawling out of the speakers as the lead guitar really spreads out good old 90s vibes and reminds me, why I fell in love with that music as teenager. The overall production is clear and fine even though this was a demo release and sounds really old school. The music is enjoyable and fans of ASPHYX, the first PARADISE LOST release or even younger bands like CORPSESSED or simply all people who like the music VFTDS stands for should at least give the band a listen or simply order the CD or the black vinyl version, which is limited to 300 copies. For more info, please check one of the following sources: https://initiate-decimation.bandcamp.com, www.van-records.de