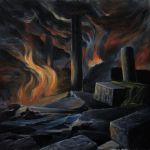 Each time Ván Records announces an upcoming release, it always channels anticipation and an urge to explore the whole release over and over again. Why this happens so spontaneously? If you never were exposed to their roster, just do it now and you will get the answer without much effort? To me, it always feels like a cave of forgotten dreams, where you will be puzzled upon each visit. Maintaining that tradition, they unearthed the enigmatic Belgian Black / Death force KOSMOKRATOR by re-releasing their debut EP “First Step Towards Supremacy” in 2016. Initiated during 2014 with their debut demo “To The Svmmit”, which announced their name and celebrated it fiercely; however, it was their EP in which they encapsulated their sound, which call forth BEHERIT and BÖLZER in a mysteriously convincing way. If the “To The Svmmit” demo showed a certain amount of clarity in the direction of bestial Black Metal due to its sound, the EP sounds rabid and drifted more towards gritty Death Metal; the songs have become more dynamic and less direct like a completely natural development after a demo. After three years of silence, KOSMOKRATOR resurfaced with a live album “Live At Hamburg Untertage” (2019), which must have been the call before the declaration of their debut full length “Through Ruin… Behold” – now released under the wing of Ván Records. This record offers seven tracks with almost 50 minutes length, each composition has their own character and foundation and has plenty of transforming zones which will connect the listener with the band and their vision. Each of the longer compositions except for ‘Irreversible Pathways’ followed that and always transitioning somewhere between Black and Death which also fits in no closet. The record experienced the most melodic moments in the second half of ‘Kosmokratoras I – In His Name Shineth The Sun’, whereas in the slow moments it reminds of BOLT THROWER as in – ‘I Am The Utterance Of My Name’. Just as pretty repulsive is the pounding ‘Ruins’, complete with growls and angry screams also respectively outraged with chanting, crushing doom and ambient parts; however, the latter ‘Irreversible Pathways’ reinforce the already very intense mood which hinted in the opening ‘The Push Towards Daath’, and also ending with ‘Nathir’ and ‘Gestorben Muss Sein’. The lyrics continue to move in the area of ​death, resistance, moral skepticism, nihilism thus maintaining their root of exploring occultism and eschatology. The Belgians are not typical “the sound like” band, but follow their own path which you will also discover in the artwork and why it is ideal for the album. The cover shows metaphorically the decline of dogmatic morality, which also upheld those behold; envisioned by legendary T. Ketola aka Davthvs (renowned for his artistic association with ANTAEUS, ASPHYX, CENTINEX, CRUCIAMENTUM, DEAD CONGREGATION, DEATHSPELL OMEGA, DISSECTION, FUNERAL MIST, GRAVE, INFINITUM OBSCURE, INSISION, KAAMOS, KRYPTS, MARDUK, NECROS CHRISTOS, OFERMOD, ROTTING CHRIST, SUNN O))), SVARTIDAUÐI) through genre defining illustrations and visions. Recorded and mixed at Blackout Studio; mastered by Patrick W. Engel at Temple Of Disharmony, with booklet artwork by A. Grigoryev and Sigil by Karmazid; KOSMOKRATOR rightfully evolved and surpassed their early releases in terms of songwriting, production, ideological and visual aesthetic. KOSMOKRATOR might not have entirely pioneered this style, but they provide fitting tribute and lasting legacy to the genre and here they shall be embraced and celebrated; which is unparalleled in terms of both extremity and closeness. Explore the release at https://initiate-decimation.bandcamp.com and visit their label page: www.van-records.de