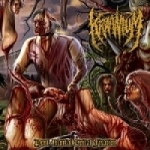 If the cover art, the name of the band and the album title gives you no idea of the music already, I guess this review must go on… much to my disgust. Brutal slam Death Metal. With gore / perverted / sick / sexual offensive lyrics and very low frog croak cookie monster vocals. Start and stop riffs, very fast Grind drum patterns and fat guitars. Back in the early 90s this was probably a fun thing to do, recalling bands like MORTICIAN, CANNIBAL CORPSE or INTERNAL BLEEDING with a good slam / mosh / core sound in there too. Even back in the day it was good for a few seconds and that still remains the same today. Hear one song, no need to listen to more. Although this is well produced and well played (at least for the limitations of the style) this moves me nothing. Even if the band comes from Norway, nothing really changes the fact that only the real die hard followers of this intestinal form of brutal Death Metal will appreciate this one. Even to found a cover version for a band named ABOMINABLE PUTRIDITY which is probably as unknown as the band that plays the cover, just makes me think this might as well be a thing on its own and has a small but dedicated sect of followers and labels that support the style. Brutal Death Metal in this case comes to me as the same as Noisecore. And for being their third album one would expect something more… If good brutal Death Metal goes with attitude and good music, I have no problem. But at least in the composition area, there is a long way to go before going up there with bands like SUFFOCATION or IMMOLATION. www.facebook.com/kraaniumslam, www.comatosemusic.com