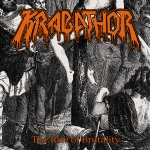 Readers of our zine are surely familiar with KRABATHOR in any way, even though these Czech warriors have not been featured that much on our site. Active as KRABATHOR since 1987, the band is one of the longest running bands in our scene and even this fact deserves a lot of respect. Having released six full-length albums and a bunch of EPs so far, especially their album “Lies” really impressed me back in the days. Before the release of “Lies” the band recorded a demo called “The Rise Of Brutality” which later got rereleased as 7 inch single via Deathvastation Records. This little piece of underground Death Metal history caught the attention of Raw Skull Recordz and finally gets the deserved attention again. After an ambient long intro the band starts with their inferno in form of ‘Pain That Doesn’t Hurt’. Cool and technical Death Metal with influences of technical Death Metal bands like PESTILENCE and ATHEIST but also with some early CANNIBAL CORPSE showing up in their sound. The riffing is very thrashy and catchy completed with cool drumming and intense blasts. The second track ‘The Truth About Lies’ is similar to the opener but also very catchy with a cool melody, making the head bang again. ‘Unnecessarity’ is also a really good track and brings back memories of another good album called “A Vision Of Misery”, which I enjoyed a lot back in the 90s. A cool uptempo track with good instrumentation. ‘Pacifistic Death’ is a re-recorded version from their demo “Breath Of Death” and has been used as bonus track on the limited edition of “Lies” while ‘Total Destruction’ was a bonus track on the picture vinyl version of “Orthodox”. Both tracks are in line with the rest and show the band in a really good shape. This release surely is only for the die-hard lunatics worshipping KRABATHOR but definitely worth to check as it reminded me as well of the quality of the band and this EP and “Lies” were granted several spins in the last weeks in my player. More info can be found at the following locations: www.facebook.com/krabathor-190937560948487, www.rawskullrecordz.bigcartel.com