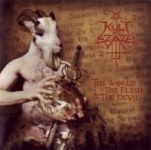 One of the best known Black Metal commandos from the United States are Florida-based KULT OV AZAZEL who released an acclaimed debut MCD in 1999 with “Order Of The Fly”, their indeed triumphant “Triumph In Fire” album in 2001 and the slightly weaker “Oculus Infernum” album in 2003. Now the third official full-length strike of high-speed Black Metal fury is about to crush religious fools worldwide and bring hellish delight to the auditory canals of all supporters of vicious, aggressive sounds in honour of the dark one! Where “Oculus Infernum” turned out to lack the brutal drive of the debut and Death Metal-inspired blasted passages, the new album offers an excellent balance of these two extremes. Dark, hymn-like slower sections unite with raging violence and hatefulness and with Xaphan’s vocals sounding more variable than ever “The World The Flesh & The Devil” is an entertaining and diversified slab of infuriated Black Metal that should appeal especially to fans of MARDUK, DARK FUNERAL. Production-wise KULT OV AZAZEL have defined their own sound already on the debut, they do not replicate the Swedish nor the Norwegian style, but have their own traditionally heavy and powerful typical way of sounding. Overall a really good album, which has only one weaker track with ‘The Glorification Of Evil’ and an unfortunately horrible artwork, but apart from that offers enthralling Black Metal with some outstanding tracks like ‘Compelled To Die’, the slower ‘Trampling The Cross’ or the closing ‘The Bloodstained Path To Victory’. Please visit www.kultovazazel.com and check out this band!