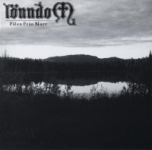 S.Sandström and A.Petterson are already wellknown because of their work with ARMAGEDDA, one of the best bands when it comes to unholy Black Metal in the vein of old Darkthrone. But these two guys do not seem to be bored of working together and, after VOLKERMORD, LEVIATHAN (SWE) and LIK, they again come up with a new project called LÖNNDOM, which has in fact some strong similarities to LIK. Knowing this made me put the CD in my player instantly, as this band always attracted my attention with their Folk Metal / Rock that can’t deny a strong influence of ISENGARD and STORM. But LÖNNDOM isn’t a LIK clone; while LIK has more of a folkloric, warriorlike and patriotic spirit, this new project is based on melancholy and simply perfect to evoke the landscapes of their country, and still having some similar influences, we could say that they are more in the middle of the most melancholic Folk and minimalist and depressive Black Metal. There are some key points in their songs, starting with the vocals, with a lot of character, and due to the Swedish lyrics they have that raw and sharp touch, as much when they are using the clear and downtuned ones but also when they border the blacker cries. On the other side there are the melodies of the guitars, which reflect the biggest Folk influence, and which at the same time are bringing together the black art when they include some speed. But this is not usual and the few times they do it is in a very melancholic and depressive way. In fact, the songs have a really interesting structure, as they are most atmospheric and with a really definite rhythm by the Folk tones, so Nordic, that adds a really groovy rhythm to them. They are really easy to listen to, but they know really well when they have to enter aggressiveness or drown deep in blackness and atmosphere. As it used to be with recordings of this kind, they chose a simple production. The guitars seem to have some slight reverb and the bass mostly marks the rhythm in a mononotous way, as well as the drums can be heard a bit far (it wouldn’t make too much sense to give them a leading role, giving a more “brutal” touch to the sound), but it still sounds pretty well, not like a can. As ARMAGEDDA unfortunately won’t continue with their career, we’ll still be able to enjoy this new project, which starts really well with “Fälen Från Norr”… We’ll see what comes next. The CD was released by Nordvis Productions and it will be released on LP now by Eisenwald, including a limited EP. www.eisenton.de