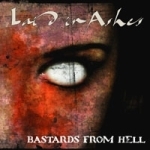 LAID IN ASHES
Bastards From Hell
(Perish In Light)
35:12min

After their debut “Freakshow 666” from the year 2003 LAID IN ASHES are back again and hopefully this release will get the attention it deserves. There are so many releases, even within the so-called underground, that sometimes good albums are just buried into oblivion. Especially when it comes to an album like “Bastards From Hell”. This one does not reveal its quality at first listening, at least not for me. But if one puts up the endurance to listen to this output more than once, then the listener will discover a fine piece of Metal. Mainly based on Death Metal, LAID IN ASHES expand the limits of this genre by adding elements of Thrash Metal, catchy melodies, like IN FLAMES or early IRON MAIDEN (I guess it depends on your age which band you would pick as comparison) and a dose of gloomy, melancholic Dark / Black Metal. The fast songs are freshened by mid-tempo parts, which perfectly fit to the songs, that mean they underline the atmosphere, not this kind of alibi mid-tempo parts. Vocals are splitted into two voices, deep grunting and husk screaming. In an interview LAID IN ASHES stated that their influences range from (of course) Death, Thrash, Black Metal over to Industrial, Prog Rock and Alternative. This wide variety of influences empower LAID IN ASHES to play such an diversified Death Metal, without losing the feeling to write good songs. www.laid-in-ashes.com