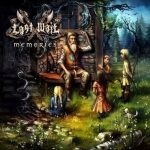 This album is a first acquintance with the Russian band LAST WAIL and for yours sincerely with Folk Metal in general. So much background info or useful references within this genre are something that you’ll be left absent with. LAST WAIL comes from Omsk and was founded in 2008 with "Memories" as their second album after "The Tale Of Endless Night" from 2011. Thriteen tracks decorate this disc, including two instrumentals (‘My Last Prayer’ and ‘Game Of Thrones’). Anyone who knows the series must have heard the intro. The music gives a clue what to expect, but the soundtrack is far more epic than the one on "Memories". A kind of medieval acoustic Rock than lean on keyboards and flute. The other tracks are a mix of Gothenburg / Pagan / Power / Thrash Metal with very much the same spirit, although there’s some kind of building up sphere. The riffs are rather jumpy and stripped from any malignancy or agression. That makes it awkward for a Metal album, although the band is working hard to transfer their enthusiasm with an occasional interesting riff as in ‘The Saviour’, ‘Northern Shores’ and ‘Bloodlust Huntress’. I have to admit that it all sounds tight and well produced, but that damn flute ruins it all as soons as it appears. Vocalist Alien reminded of Angela Gossow and drummer Marchello knows how to keeps it running and if you can pierce through the flute and can enjoy the sunny side of Metal, this is a nice album that will do good at a party or anything involving alcohol. For more info, check www.facebook.com/pages/last-wail/116698101689802, www.stygiancrypt.com