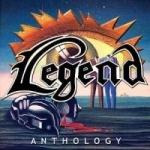 “Anthology” is just that, spread across two discs, a complete discography of the legendary NWOBHM legends, LEGEND! It’s been awhile since I gave my various LEGEND vinyls a spin, so it is was quite enjoyable to dust off the audible sensory in annals of my brain to re familiarize myself with all of this great material. In kicking off disc one with their debut self titled LP from 1981 (though in a different pecking order that the original vinyl release) it all came back to me oh so very quickly. Led by the menacing piercing guitar work of Peter Haworth, this debut has the prowess of the early primitive NWOBHM sound, with fragments of 70s Hard rock still attached. Lots of great tracks here such as the 9 minute plus ‘Song For A Soldier’, ‘Torture’, and the mid paced grinder ‘Buried Alive’. All 7 tracks flow smoothly through as a whole which is to be what is quite often considered to be one of the classic historic early NWOBHM albums. Finishing out CD # 1 is their “Limited Edition Four Track Single” (as I know it to be called) from 1982 (this was released after their 2nd LP came out), the title is referred to as “Frontline” on here. Again, in a different order than the vinyl version (side B is first, then followed by side A), either way you play them, all great stuff. Did I mention the shreddery of Peter Haworth? Over to disc two with their second (and unfortunately last) full length album “Death In The Nursery”. The rearrangement of the songs tricked me on this one, but how can you go wrong with starting off in a peaceful way with the melodic entrance of ‘Why Don’t You Kill Me’ which will have you head banging immediately at one minute twelve seconds into the song as soon as that riff hits you along side the head. Other highlights include ‘Choices’, ‘Warrior’, and ‘Time Bomb’. At this point of their sound, most of the Hard rock had been chiseled off (though some residue exists) to reveal that true textbook NWOBHM sound with nice melodic overtones. All in all, “Death In The Nursery” is another fine gem. For the connoisseurs, rounding out disc 2 comes a nice treat in the form of a 6-song demo from 1983. While not having as much of a Metal edge as their previous recordings, this is still very high quality stuff with high level musicianship all the way through. Though a little bit more polished, even somewhat jazzy in some spots, this will still rock you hard. This is the first time hearing this demo, I’m glad that they released it. Wether you are an old timer looking to relive these sounds or someone new looking to hear LEGEND for the first time, “Anthology” is a worthy addition to any heavy rocker’s archives. Again, I must bring attention to the incredible guitar work laid down by the unsung axeman Peter Haworth who doesn’t really get the recognition that he so much deserves. Open up the skies… www.sinaptik.com/legend, www.rockadrome.com