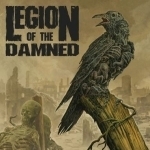 There has been quite much going on in the camp of Dutch purveyors of unstoppable aggression and infamous brutality LEGION OF THE DAMNED, whose previous album, "Descent Into Chaos", didn’t quite hit the nail deep in most of our skulls, I guess. Since that album the LEGION OF THE DAMNED’s main 6-string shredder was changed from Richard Ebisch to Twan van Geel (also in FEHLER, FLESH MADE SIN, etc.). Richard was said to be stressed out by the numerous tours and stuff. If that wasn’t enough, LEGION OF THE DAMNED’s ex – member and close friend Twan Leuren who played bass on the band’s successful debut album, "Malevolent Rapture", committed suicide on May 20, 2011. So, what doesn’t kill you, makes you even more pissed off or something along those lines, right? LEGION OF THE DAMNED have been working silently with the band’s 6th studio opus, titled "Ravenous Plague". Don’t know what has happened during their ‘silent period’, but whatever that is, it has only had a positive development for the band. Seems like they have gotten their creative juices flowing again. The bottom line is that LEGION OF THE DAMNED haven’t allowed any of their setbacks to turn them down; they have kept things going on and finding Twan van Geel for the guitarist’s position, must be a true jackpot for the other guys. I mean, the songs on "Ravenous Plague" are about riffs, riffs and even more riffs – and from the more tasteful end of the riffs. LEGION OF THE DAMNED have gone back to the times of their highly enjoyable debut album "Malevolent Rapture", and clearly adopted a bit more pure Thrash orientated sound on "Ravenous Rapture", which is great in my opinion. I have always considered their debut as their best work anyway – and now if I made up my mind whether it still holds that title, it would be extremely tough for me to decide in between 2 of these fine releases, which record will win that title eventually. It even may be that "Ravenous Plague" tops their debut in my books. New fresh energies and ideas are definitely flowing in this Dutch combo, and it’s obvious they have started a whole new era in their career now when guitarist Twan is a part of the band with his absolutely riff-tastic guitar work that he has provided for "Ravenous Plague". LEGION OF THE DAMNED have always said to be hugely influenced by SLAYER sound wise (who wouldn’t then?), and the songs on "Ravenous Plague" finely tend to underline that fact even stronger than on their a few earlier albums thus far. LEGION OF THE DAMNED is about 100% bullet-proof Thrash on "Ravenous Plague"; the style that is not to meant to re-invent Thrash Metal all over again, or even bring new, never-used nuances to it but undoubtedly it’s the kind of style that will be loved by many. LEGION OF THE DAMNED are back, in a big way. Some credits must also be given out for Andy Classen for his great production, as well as Wes Benscoter for his gruesome artwork on the record. More about these vicious Dutch Thrashers can be found at: www.facebook.com/lotdofficial, label: www.napalmrecords.com