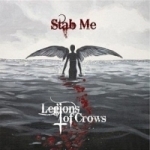 "Stab Me" is the debut album of the British Black / Doom duo LEGIONS OF CROWS, consisting of guitar- / bassplayer Herod and vocalist / keyboardplayer Attila (not the MAYHEM namesake). The drums are programmed (as you might have guessed) but it’s no problem here. Actually, the programming is one of the highlights of this well produced record. The rhythms are powerful and sometimes in contrast with the rest to make it more twisted. Just listen to ‘Defecate’, a track that will probably upset most of you 😉 LEGIONS OF CROWS already released a demo in 2009, called "Cacophonous Aural Wickedness" which included some tracks to be found here. To give you a hint of what to expect musically, imagine early ELECTRIC WIZARD with a wide varity of elements from for example CRADLE OF FILTH, BLACK SABBATH, GHOST, TYPE O NEGATIVE. People who are attracted to TERRA TENEBROSA, ULVER, GHOST, MY DYING BRIDE, SUN O))) and likes should give this a chance. LEGIONS OF CROWS blends elements of both genres together with Black Metal in the vocal department, while the riffing and overal atmosphere is pretty much Doom. Most distinguishly, "Stab Me" explores wider territories, constantly mainting a certain morbidity throughout the entire album. A track like the mainly spoken ‘Legion Of Crows’ or opener ‘Provident Hymn / Malediction’ kept me focussed because of their blasphemic nature. Overally a refreshing, interesting and twisted release which you don’t find everyday on these pages. For all further information check out www.facebook.com/pages/Legions-of-crows-Attila/149292095099071, www.myspace.com/legionsofcrows, www.funeralrainrecords.com.