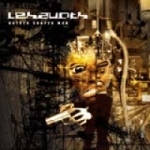 The band’s name LEHAVOTH might be misleading a little bit as I immediately associated it with Black Metal… Well, actually I wasn’t completely wrong here as this brutal five piece from Israel started out as a Black Metal act way back in 1995 and even released a demo (“Brith Ha Orvim”) during that early period of their existence. But then the military service forced the members to put the band’s activities on ice for several years. In the year 2000 original guitar player Gal Cohen and vocalist Molech finally resurrected LEHAVOTH, but this time not only with a slightly changed line-up, but musically also with a different, way more brutal overall approach. A new demo (“Iconoclastic”) gets recorded and in February 2002 the band travels to Europe, to record their debut album “Hatred Shaped Man” at Sweden’s Soundlab Studios with producer Mieszko Talarczyk (who already gained experiences with the likes of Nasum or Genoside SuperStars). This recording immediately caught the attention of Wilko at Hollands Fadeless Records, who offered the band a deal right away, which they gladly accepted. And the rest is already history. “Hatred Shaped Man” has become a real crusher of an album, with nine highly intense compositions, full of technical perfection and the necessary right-into-your-face kind of attitude. I never heard LEHAVOTH’s Black Metal past, but judging them just by this half an hour of music, it sounds to me as if they never ever played anything else than brutal Death / Grind in their entire lifes. The material is so full of intensity, the riffing so effective, that it’s pretty hard to imagine, seeing these guys play Black Metal. Unlike many other grinding Death Metal acts LEHAVOTH are not in it just for the speed’s sake, but for groovy yet devastating brutality. If you’ll listen carefully, you may track down influences from a wide area of different bands, from the disharmonic elements of early VOIVOD, to the shredding sickness of old Swedish Death / Grind masters up to brutal American Death Metal. A very solid and unique mixture, performed by a band with a very bright future! The CD even comes with a video bonus track of the track ‘Non Civilized’. Keep an eye on them! Label contact: www.fadelessrecords.com.