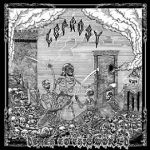 After this underground gem had been released on vinyl by To The Death Records in 2015 it got finally its well deserved treatment on CD. It was unleashed upon this rotten planet by the Swedish label Cryptorium Records which brought us also the extremely great MEGASLAUGHTER box set. LEPROSY was a killer four piece hailing from Helsingborg / Sweden. Despite delivering a quite convincing brand of Thrash / Death Metal they unfortunately never got signed and weren’t able to present their killer tunes to a wider audience. Being close to be put on Earache’s roster the band failed to get a deal. It seemed that the responsible one at the headquarters of this famous label was deaf when listening to the stuff or whatever. Anyway now you have the chance again to delve into this excellent compilation which includes all stuff the band recorded back then. The disc features the "Death To The World" demo from 1988 which includes four neckbreaking tunes and two intros. The songs have a more Thrash Metal approach than their later material. Sometimes LEPROSY’s stuff reminds me of an aggressive, fast and violent alloy of PROTECTOR, SEPULTURA, DEATH and PESTILENCE. The 1990 demo "Full Of Hate" saw the band craving for a more complex and matured brand of Death / Thrash. The Death Metal part in their sound was unmistakable increased and much more dominant than before. Although the band offered more sophisticated material the horde didn’t lose any single piece of their brutality. If you have a listen to stuff like ‘The Saviour’ or ‘Evironment’ you really can’t understand why they didn’t make it bigger. They unfortunately shared the same fate than many other great bands before and history was unfair to our Swedish lads here as well. The seven songs (incl. two intros or instrumentals) remain as a true convincing testament. In 1990 the outfit recorded a rehearsal tape with four tracks which should become their last sign of life. It was recorded in the band’s own rehearsal place and it has a very rough sound. The aural assault of the "Death To This World" CD was enhanced with a DVD (for visual pleasure) which features two live shows the band did in 1988 (Bamberg) and 1989 (Ludwigsburg) in Germany. Especially these gigs bring back a lot of memories to me as I witnessed these live shows back in those times. I still can remember when LEPROSY hit the stage in Bamberg together with MEGA MOSH, PROTECTOR and SODOM. But don’t expect a professional movie quality here as it was filmed with a hand camera. Those were the days. Anyway, I can highly recommend you to get hold of one copy of this cool CD / DVD set. The discs are housed in a nice digipak and it features a thick booklet with tons of pictures, flyers and liner notes. For prices and ordering details please get in touch with Cryptorium Records (www.cryptorium.se). So what you are waiting for? You won’t regret it!