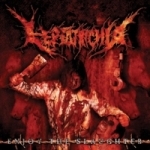 LEPTOTRICHIA vs AMPUTATED
Enjoy The Slaughter / Up To Our Nuts In Guts
(IBD Records)
26:39min

I’m not exactly a fan of split releases, but if the participating acts equally know to impress it’s definitely a cool thing. And in this case here, it certainly was! Both bands previously released their material on their own already, so die hard underground collectors not necessarily need this anymore. For everyone else LEPTOTRICHIA vs AMPUTATED is a cool item worth checking out though. The first four songs on offer here are from Belgium’s LEPTOTRICHIA, who originally used to spread it as a self financed mini CD, entitled "Enjoy The Slaughter". Just like UK’s AMPUTATED they play a very intense and brutal form of grindy Death Metal, with the necessary technical skills and a solid, powerful production, courtesy of CCP Studio. In direct comparison to AMPUTATED the LEPTOTRICHIA guys seem to be the more matured sounding band, with more variation in their writing, but also with a not totally convincing, brutal – yet in my opinion partly too faceless sounding vocalist… So after I couple of listens I started to enjoy the overall more raw and shredding AMPUTATED a lot more, mainly because of their totally uncompromising attitude! Maybe this is because of the fact that their part of this split release originally was "just" a demo ("Up To Our Nuts In Guts"), or that their songs simply don’t sound that "contructed", I don’t know… They just have this straight ahead and very intense rough feel to it, that you either love or hate and which I miss a little bit in LEPTOTRICHIA’s material. To give you a little idea of what I’m talking about here, take one of today’s brutal US Death Metal acts and compare them to something that comes across like a mixture of older CARCASS meets BOLT THROWER meets TERRORIZER running all over you and then tell me what you consider more exciting…?! But don’t get me wrong – LEPTOTRICHIA still is a very cool and promising band. It’s just that they can’t really cope with AMPUTATED. Period. This split CD ends with someone’s saying "That was the biggest load of crap I’ve ever heard!"… Well, needless to say that he’s completely WRONG, isn’t it? For all further info check out the label’s website: www.ibdrecords.com