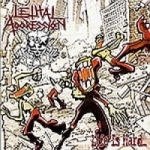 Thrash / Crossover from 1989 now staring you straight in the face with a wide eyed grin, while a rusty knife is plunged into your stomach just to keep your attention on the task at hand! This is brutal East Coast HC mixed with enough Metal to earn potential fans of CARNIVORE, M.O.D., The ACCUSED, S.O.D., D.R.I., SUICIDAL and various other hybrid fiends that fall on either side of the genre aisle of early ’80s American Punk / Hardcore / Metal scenes. Great stuff! Forty-three songs worth! That’s twenty-two extra tracks for those that own the debut original put out by Funhouse. In random order of course and encompassing the chasm of material spat out by these fellas (didn’t Relapse try something like this in ’01? I seem to remember a compilation of LETHAL AGGRESSION a score called “From The Cunt Of The Fucking Whore!”) including the hard to get ’87 EP “We Just Killed Rock N’ Roll” and 1990s charmer “Subliminal Erosion” and a few more audio beatings of this rabid, Vodda vodka induced mayhem that just makes me harken back to those days when I didn’t work, when it was far easier to get laid, and Metal still had an air about it that scared the shit out of your average suit n’ tie mutherfucker! Those were the days! Cool re-issue over all. Glad someone finally got around to doing this, thanks Dave! As this was a promo for review, can’t tell you about the layout or any extras that might accompany this disc (aside from the live track that closes out this record). If anything I would of done differently had I released this CD, I would have re-released this album with a free live double disc as a bonus. Or even a live CD / DVD of the same. What better way to reminisce about those times than reliving a bit of it through a T.V. Party of hard grain alcohol, crowd surfing on the couch, speakers cranked! Buy Now! Contact: www.xtreemmusic.com or www.myspace.com/lethalaggression