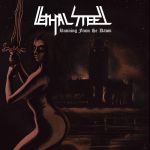 Swedish Heavy Metal delivered on one of the best Heavy Metal labels around these days! Classic melodic Heavy Metal with a focus on big melodies, catchy and driving rhythm patterns and very hooking vocal lines and great choruses. We even get a track in Swedish ‘Ge Allt’ on this four track EP, which is the band’s second release on the German label High Roller Records, as the Swedes also released their debut full length album “Legion Of The Night” on the label in 2016. The debut was quite fine, though now four years later, the band has become a tad more refined and focused on their classic take on Heavy Metal with big choruses where the whole band tap in. Well delivered and written music with a good deal of soul all over. All from the ripping guitar, over the awesome vocals, to the varied and powerful drumming, to the whipping basslines, it all kicks ass! This might be a cliche-driven album, but damn, the good old Heavy Metal clichees works damn well, when delivered energetic and relentless like this. It has might been done and heard, thousand times before, though each band with an energy like LETHAL STEEL brings fresh breath to the plate and carve themselves a line in the book of Heavy Metal. www.facebook.com/lethalsteel, www.hrrecords.de