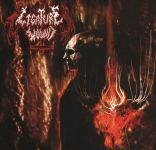 For a long time, one-man projects were quite typical for Black Metal. Now this phenomenon starts reaching the Death Metal scene as well. LIGATURE WOUND from the Finnish town of Vaasa is the newest example. The man behind the band is Kalmalehto, who played in the Black Metal band VUOHIVASARA before (I don’t know under what “Black Metal war name”). In his opinion, there were too few bands that played this sound in the old school way of the late 1980s, early 1990s, be it Scandinavian or North American. Thus he started LIGATURE WOUND and wrote and recorded six songs all by himself. Iron, Blood And Death Corporation, the label of Kalmalehtos former band, took care of these efforts and released them as an EP under the name “Undead Of The Night”. The basic idea of Kalmalehto is of course a noble one, the execution, even more important, is fine, too. Both tracks and riffs are pretty variable, the guitar leads are highlighting the songs and the vocal delivery is fitting to the sound. The title track alone is worth checking out LIGATURE WOUND, but ‘Dismember Her’ or ‘My Bloody Valentine’ are both nice tunes that should be a tasty bloody meal for any Death Metal lunatic. The whole rotten piece of plastic sounds timeless, with only one flaw in my eyes. Drum machines are mainly the death of a good sound. And even though that won’t be too unfitting in a Death Metal context, that machine takes the fine stuff on “Undead Of The Night” a little bit of its raw brutality. But as soon as this project grows into a full band, I’m pretty sure that LIGATURE WOUND will kill seriously. Be among the first to know the band and check them out at: www.facebook.com/ligaturewound or https://ligaturewound.bandcamp.com. Visit the label as well at: www.facebook.com/ibdc666