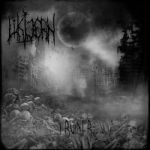 LIKTJERN is a pretty interesting Black Metal band from Norway. These guys are active since 1996, but due to personal issues their first official recording was released in 2006: the EP “Kulde, Pest & Død”. Now, in 2021, LIKTJERN has just released their first full length album entitled “I Ruiner” through the German label Folter Records. Here we have eight tracks for almost 44 minutes of Norwegian Black Metal in the purest spirit of the ’90s. LIKTJERN aren’t particularly fast, but they focus more on slow double bass galloping parts and mid tempos. Yes, there are some accelerations here and there with euroblasts, but they never reach the extreme levels of speed and brutality of bands like MARDUK, URGEHAL, MOLESTED and TSJUDER. The guitar riffs are cold with a good amount of tremolo picking and sinister melodies. The production is professional, although it lacks a bit of rawness. What I liked most are the vocals: very sick and possessed screamings that fit perfectly with the music. In conclusion, if you’re a fan of early Norwegian Black Metal in the vein of GORGOROTH, DARKTHRONE, TRELLDOM and SATYRICON, especially their quieter songs, you’ll enjoy LIKTJERN too. www.facebook.com/liktjern, www.facebook.com/folterrecordsgermany