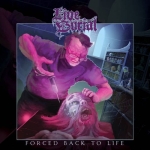 LIVE BURIAL from the United Kingdom are active since 2012 and their first full-length now gets unleashed via Dunkelheit Produktionen. This small German label has signed some fine underground artists and finally give these British warriors the chance, to present their old school Death Metal in the vein of BENEDICTION, BOLT THROWER or AUTOPSY to a wider audience. After the obligatory intro, the band starts their inferno in form of ‘Forced Back To Life’, a Death Metal steamroller in the tradition of the mighty AUTOPSY. Brutal riffing with intense solos completed by PESTILENCE influenced vocals really catch the listener from the first tunes. Brutal intense drumming and even more intense bass-lines really show the quality of these newcomers. Brutal old school Death Metal is their main topic, changing from the British school to the early 90s school from the United States, but also the Swedish way of old school Death / Thrash Metal gets honored here and there. Their brutal filthy sound spreads the stench of putrefaction and really does not care for any trends and interprets the old heroes in an old school but still modern way. Their Death Metal changes into Doom or Thrash Metal or even Hardcore / Punk where it fits and keeps their sound varying and always brutal. Especially the bass-lines crawl into the ears and the weird bass-solos really kick the listener’s ass. ‘Sleep Paralysis’ is an outstanding track and a good taster with killer riffing and brilliant leads. The band really re-animates the good old times, when the UK was a leading force in the international Death Metal scene and together with CRUCIAMENTUM, these guys really are the most promising newcomers from the Isle. The classic Voices readers can check these uncompromising guys out without any doubt and will not be disappointed at all from this little old school treasure. More info can be found here: www.facebook.com/liveburial, www.dunkelheit-produktionen.de