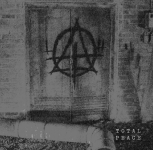 Finnish LOATH is a somewhat freshly formed (in 2013) Crust / Grindcore / Doom act, in which 4 lads share a same musical vision how they want their extreme Metal to sound like. LOATH’s 10-track debut effort, containing of 31 minutes of stuff – despite not breaking any existing genres of extreme Metal a bit at all, it still sounds pretty darn refreshing, sort of. Their crusty, occasionally Doom laden Grindcore reminds me partly of the times of AUTOPSY’s "Mental Funeral" era – just having more grinding and crusty elements involved within the songs on their album. Not a bad sounding release by any means, I would say. Mostly they concentrate don churning out mid-paced and slow, Crust infested and at times even teeny-weeny experimental mixture of Doom and Grindcore, which is something that tickles my auditory nerves kinda effectively at least. 30+ minutes is an optimal length for this type of stuff; like a tasty snack that you can enjoy whenever you want to. Nice. More info from LOATH can be dug up from: www.facebook.com/loathband, label: www.inverse.fi