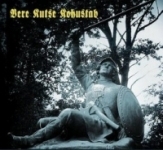 LOITS’ main problem is the lack of variation, which is a sad fact since much else surrounding this Estonian Heathen / Black Metal band is filled with quality. The sound is strong, the band has an identity and it feels like they really put some effort behind their expression. There are some normal vocals here and there, such as in ‘Kodu’. I don’t know if LOITS’ singer has done some song lessons, but in order to improve he should. In my opinion the grim vocals are way better. A point is that since all lyrics are in their native tongue, it could easily be that fact which makes the normal vocal sounding rather strange to my ears. No matter reason, I don’t think they are strong. But the main vocal is, as said, way better and comparable to Storm’s of MASTER’S HAMMER. They are very grim, and due to the Estonian pronunciation it feels like the vocals are even grimmer than most Black Metal singing. But somehow I think the vocals don’t fit the music. It’s like the music is too rockish and straightforward for such a grim vocal. At times, such as in ‘Oskar Ruut’ I sense some DARKTHRONE, in other times I feel the more raw and punkish attitude of in example MOTÖRHEAD. Back to the opening of this review. I think the album as a whole is too monotonous. The music is performed mostly in mid-tempo and even though the inclusion of some keyboards helps a bit I still find the music a tad too repetitive. Of course I notice the difference between various tracks, like ‘Võitluslipp’ is different from ‘Raiugem Ruunideks’, but when the album is finished I’m left with an impression of an album that is too simple for my taste. Add to this that it is too rockish for me, and sum is that “Vere Kutse Kohustab” is not an album that adds something to my life. All this said, I also think it is an album that should be checked out since it has a good sound and the band has an own identity. It may affect your life. www.loits.org