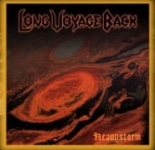 Does anyone still remember Philip Gresik? No? Well, I bet you do! This guy used to be the bass player on the debut by Australia’s Thrasher HOBBS ANGEL OF DEATH in 1988 and as far as I remember was also connected to DESTROYER 666 as well somehow later on (but don’t quote me on that…). LONG VOYAGE BACK is his solo project and after having released a self-titled mini CD already, he finally comes up with his first full length, simply entitled "II". Unlike his past musical activities, LONG VOYAGE BACK is not aggressive, fast or thrashy – it’s actually the total opposite of that! Very relaxed sounding, moody and midpaced material, with simple heavy riffing and a ritual like vocal delivery, a little similar to TORMENTOR’s Attila maybe. It’s very difficult to put a label on his unique sounding compositions, so just let me tell you that you need to be very open minded to get into it. It’s very melodic, but never wimpy sounding; catchy, but not in a mainstream way and also kinda groovy, but not like any of the annoying modern type bands are doing it. All in all a cool record to relax to if you hate to listen to commercial music but need a break between your latest Grindcore purchases. Further info from MODERN INVASION MUSIC, P.O. Box 1417 M, G.P.O. Melbourne, AUSTRALIA 3001, e-mail: hailmim@alphalink.com.au.