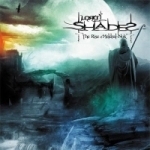 Having been existing since 2001, the French 4-piece atmospheric Black / Death Metal act LORD SHADES took 2 long years for preparing to record their 2nd follow-up album, titled "The Rise Of Meldral-Nok" that is a sequel to their debut album, "The Downfall Of Fire-Enmek", self-released in June 2008. The word ‘atmospheric’ becomes soon very crystalized in terms of how much the guys have thrown in different sound effects, used a vast arsenal of different instruments from violin to bouzouki to flute to bagpipes, etc. – plus, in addition to all that, have also used special guest both male and female vocalists for this record (who all seem to have some sort of a classical background) – kind of like maximizing the album’s pompous and epic musical effect on listeners. Well, a fair question however is, does all of this work for them then? Well, partly it does – and partly it does not, sort of. First off, this recording contains 8 songs all in all, varying from 4 to almost 12-minutes in length – and there’s nothing bad about it at all. But when it comes to these overly lengthy songs, from 9 to nearly 12-minutes (there are 4 out of 8 tracks with that crazy length on the album), somehow it starts feeling like there are some parts in these terribly lengthy tunes that kind of don’t click to each other that seamlessly, like they should do in order to form a solid unity. Because of that LORD SHADES unfortunately gives an impression to some listeners (me included) that they have tried to achieve a similar impact this thoroughly epic record, in which f.ex. Norwegian DIMMU BORGIR has so well succeeded earlier at. There are a few insignificant – I call them roughly ´lazy parts’ in between these megalomaniac lengthy tracks that actually weaken song structures rather than strengthen them. Sometimes some wise guys have said that ‘less is more’, which is also something I wholeheartedly subscribe, too. However, please don’t read me completely wrong, as in the same breath I do need to admit that there’s also something appealing in these most lengthy tunes on this record that sort of allow your mind break loose somewhere towards sort of dream-like realms, in which one is able to lose her / his touch to reality somewhat perfectly, if she – or he, truly wants to. In that sense LORD SHADES does a pretty great job, regardless of some irrational song arrangements that seem be slightly out of the place here and there. Secondly, many surely will see LORD SHADES as a plain DIMMU BORGIR clone act, which even becomes rather evident because they admittedly do have many of the same elements in their atmospheric and symphonic Black / Death Metal that securely bring this aforementioned Norwegian ‘mega-popular’ group in many of our minds for sure. One thing also is sure: These French musicians in LORD SHADES are all obviously very ambitious yet professional in order to achieve something ‘big’ with their music in the future, so we really cannot blame them for reaching some of these theatrical and even surrealistic sounding heights by the stuff they do on "The Rise Of Meldral-Nok" – or can we actually? Last but not least, extra thumbs-up for a very luxurious looking package of the digipak-CD, and sorry for my sincere honesty as far as your 2nd album was concerned. www.lordshades.com