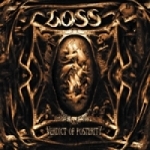 “Verdict…” is LOSS’ debut album and it’s strong! Their demo “Human Decay” had already been voted as the demo of the year 2000 in the swedish Close Up mag and by listening to their debut you can easily see why. Very intense and aggressive, yet melodic Swedeath (far less melodic than IN FLAMES, though): energetically, LOSS show their faible for the early years of this sub-genre and if you like that particular style, you’ll definitely have fun with this record. The song ‘Worship This’ features some cool deep viking-sounding choirs (whatever that is). The strong production in the band’s own studio is another good reason for laying your hands on this one. Only the short playing time leaves a somewhat negative taste, but on the other hand there are no fillers on “Verdict…” so you can easily make this CD a longer listening enjoyment by pressing the repeat button… hell yes!